THERE WAS A sudden, unexpected earthquake that struck northern Pakistan. Its arc of destruction ranged from the mountains of Afghanistan in the west, through the Himalayan sub-ranges into Kashmir and India to the east. That much is true.

It hit Pakistan hardest, where it claimed the lives of 80,000 and left millions homeless. Entire villages and townships were raised to rubble, including schools, hospitals and government buildings. Roads were torn from the slopes to which they clung and bridges were shaken into the valleys below. The entire infrastructure of the north-west was swept to destruction in less than 30 seconds that Saturday morning in October 2005.

Among the online reports I read at the time was the harrowing account from the town of Balakot, which lay close to the earthquake’s epicentre, co-authored by The Telegraph South Asia correspondent, Peter Foster. He has recently commented: “It was the most brutal story I ever covered. Worse than the 2004 tsunami or either Afghan or Iraq conflicts. Just thousands of people left to die basically…”

I myself travelled to Pakistan to report for a local newspaper first week of January 2006, when the region was still reeling from the catastrophe and the emergency response phase was in full swing. Initially I was to visit for ten days, travelling from Islamabad into the ‘quake zone. Many villages had still not been reached, such was their remoteness in what was then North-West Frontier Province and Pakistan-administered Kashmir.

It was during this time that I first met Frank Lyman, the operations manager in Mansehra working for World Vision Pakistan, who was heading the international agency’s emergency response. I was also later to meet Abdul Waheed Khan and his associate Syed Latif, who worked for Bright Education Society, a local NGO.

And yes there was a Black Mountain tribal area. It had not been reached since the earthquake, due to its remoteness, its autonomy and its history. Information on this area was therefore scarce, almost non-existent.

A map was discovered. Wylly’s 1912 account of the warring tribes and their suppression by the British Indian Army, more than a century before the earthquake, is accurate. And there was a significant aid distribution to the area following the disaster, which was eventually made possible.

Certainly The Humanitarian is a novel based upon real events. I will leave the reader to decide how much of the story documented within its pages is true and how much is fiction. It is fair to say that the central characters never existed. Yet the story is drawn from real people and situations witnessed first-hand.
In this sense, it is true to its theme and those 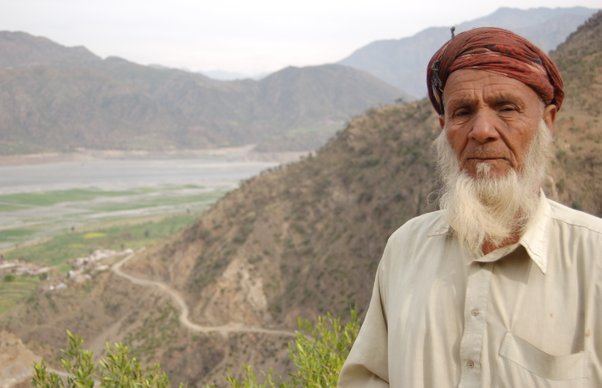 who were part of the emergency response at that time in Pakistan.

Shahbaz, the shepherd boy never existed. And yet there were thousands like him caught up in the aftermath of the earthquake.

The same can be said of any number of Pakistani villagers portrayed in the novel, such as Shahida Bibi. Her story was typical of many female-headed households in the north-west and the suffering they endured and still do.

As for the aid workers, that collection of ‘mercenaries, missionaries and misfits’ portrayed as part of the humanitarian community within the book. I have shared time with many of them across South Asia and West Africa. People as different as Jim Maddison and Gail Stevenson.

And I acknowledge the debt of shared experience and of inspiration. For most of them do good work in extreme circumstances, often at great personal risk. My thanks therefore must go to Frank Lyman, to Syed Latif – and to Abdul Waheed Khan, who made the ultimate sacrifice for his compassion.

A true humanitarian. My own involvement in Pakistan was largely ‘accidental’. I had no intention originally of staying beyond the initial ten-day journalistic assignment I had embarked upon. As it happened, as it often does in life, things did not turn out as I had foreseen. What is true is that my experience in Pakistan changed my life. I hope for the better.
I had never experienced mass human suffering close-up. And yet I was impressed by the resilience of those who had literally lost everything. Insurance is a rare thing in Pakistan and there are no support mechanisms as we know them in the developed world for those who have fallen on hard times. Never had I encountered such kindness from those who were suffering so acutely. It was a truly humbling experience, which I will never forget.

What of my own story? I ended up travelling to and from Pakistan for the best part of the next decade, spending prolonged periods working in the mountains or living in Islamabad. My son, Jalal was born in the federal capital and spent his first year in Pakistan, before we relocated back to the Midlands in the UK. But a few years later, back we went, drawn once more to ‘the land of the pure’ and to resume the work which my then partner and I considered unfinished.

Of course, for most people who have experienced humanitarian work and seen the need and circumstances of those held in the grip of poverty the mission is never complete. There comes a realisation that whatever one achieves it is not enough. It is like a small drop in an ocean of need. Because the need is so very great – and the world so very slow to change in this respect.

I left Pakistan for the last time at the end of 2014. But it is also true that I think often of the people I came to know and love in the mountains of Pakistan. The time I shared with them had a profound impact on my own life. And the dream remains that one day I will be able to return…